Robert Keers was a lecturer in psychology at Queen Mary University. His research aimed to understand how both genes and the environment influence the development and treatment of anxiety and depression. He took an interdisciplinary approach to this question and used a range of methods from human genomics, animal models and pharmacogenomics to large case-control, twin and cohort studies.

Elham Assary is a postdoctoral researcher at Queen Mary University of London. Her research aims to understand how the interaction between genes and the environment influence the development of psychopathology or resilience to it. Her current research uses a range of behavioural and molecular genetic methods to investigate which genetic factors relate to variations in sensitivity to positive and negative environments and how they affect the outcomes of such environmental exposures.

We conducted a genetic study of environmental sensitivity using a novel approach involving identical twins. Using these findings, we were able to estimate the genetic propensity to environmental sensitivity in two further samples and showed findings that were consistent with theories of sensitivity. Specifically, highly sensitive children were disproportionally affected by both positive and negative experiences and responded differently to psychological treatment.

Sensitivity theories suggest that genes explain why some people are more sensitive than others [1;2], and our recent study of twins supports this idea [3].

Despite this, our knowledge of the genetics of sensitivity is still limited. Sensitivity is a complex trait caused by the cumulative effects of hundreds, if not thousands, of genetic differences. This represents a major challenge for molecular genetic studies.

It means that in order to detect all the genes involved in sensitivity, we would need to carefully measure all of the positive and negative environments in the lives of a large group of individuals and test how their response to these experiences is related to (millions of) genetic differences.

These differences are further exaggerated by sensitivity. For example, imagine a highly sensitive twin-pair carrying many sensitivity genes. One member of the pair is bullied at school, while their co-twin has a relatively positive school experience.

Sensitivity theories predict that these twins will grow up to be quite different from one another. The twin exposed to adversity (bullying) will be disproportionately affected by this and may develop symptoms of depression or anxiety, while their co-twin will disproportionately benefit from their positive experience of school and have a high psychological wellbeing.

Now imagine a twin-pair with very low sensitivity carrying few sensitivity genes. As they are relatively unaffected by positive or negative environments, these twins will grow up to be very similar to one another, even if they have different experiences.

Using this logic, within-pair differences in a given outcome can be used as an indirect measure of environmental sensitivity. Importantly, this simple outcome can be applied to data from the whole genome to search for sensitivity genes without the need to measure the environment or test for complex gene-environment interactions.

We conducted the first ever genome-wide association study (GWAS) to apply this method with a focus on emotional problems in around 1,000 12-year-old identical twin-pairs from the Twins Early Development Study (TEDS) [4]. We used these findings to create a Polygenic Score of Sensitivity to the Environment (PGSSE) in two unrelated samples.

The polygenic score reflects an individual’s level of sensitivity based on their genotype. Using this genetic score we explored whether the effects of parenting on emotional problems, or response to psychological therapy for anxiety, differed depending on an individual’s genetic sensitivity.

Information on parenting and children’s emotional problems were collected via self-report questionnaires. Data on treatment response for children with anxiety disorder included the type of treatment a child received: individually, in group or parent-led.

These effects were potentially clinically meaningful. For those in the top third of environmental sensitivity remission rates were 70.9%, 55.1% and 40.6% for individual therapy, group therapy and brief parent-led therapy respectively.

These findings suggest that for those with a relatively low genetic sensitivity to the environment more cost-effective, lower intensity approaches are equally as effective as face-to-face treatment.

Genetically sensitive children with anxiety disorders were also more affected by the type of treatment that they received and responded better to more intensive individual therapy.

The findings from our study could have potential for prevention and treatment of mental health problems such as anxiety and depression. An individual’s genetic score could be used for personalised medicine to select the most effective treatment for a given patient, or for preventative strategies targeting those with the greatest genetic sensitivity to adversity.

It may also provide new insights into the biological mechanisms underlying resilience and treatment response and provide novel therapeutic targets.

Despite these encouraging new findings, the study could be further improved. For example, a substantially larger sample of identical twin-pairs would produce a more accurate genetic sensitivity score.

We recently received funding from the Wellcome Trust to set up the genetics of Environmental Sensitivity Consortium (GenSEC) bringing together over 20,000 identical twins with genetic data. This very large sample will allow us to replicate and refine the genetic sensitivity score, and explore whether genetic variants that increase response to the environment operate in similar ways across disorders and ages. 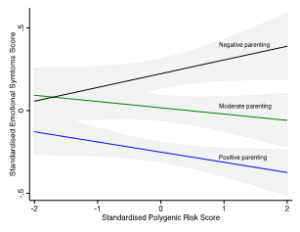