Skip to content
You are here: Home > Blogs > Environmental Sensitivity and Serotonin Transporter Gene Variance: from Rats to Humans

Judith Homberg is professor Translational Neuroscience at the Donders Institute for Brain, Cognition, and Behaviour in Nijmegen, The Netherlands. Her preclinical research group focusses on understanding individual differences in behavior in relation to vulnerability and resilience to neurodevelopmental and stress-related disorders.

One exemplary gene variance that confers environmental sensitivity is the serotonin transporter linked polymorphic region (5-HTTLPR), which describes a section on the DNA that comes in either a short or a long version, referred to as allelic variants The short allelic variant, compared to the long allelic variant, of this promotor gene variance is associated with reduced expression of the serotonin transporter (5-HTT) and increased environmental sensitivity.

In humans these can be pictures of sad and happy faces, and in animals stress (e.g. social defeat) and reward (e.g. sucrose, environmental enrichment) [1, 2]. This suggests that the function of the serotonin transporter is highly conserved and that its effects on behaviour are mediated through similar neural mechanisms (i.e., genetic effects influences behaviour through specific neural mechanisms). However, this has not been empirically tested.

How the human study was conducted

We focused on sensitivity to a negative stimulus (threat), thus one side of environmental sensitivity, because threat sensitivity can be tested in humans and rats alike. We tested healthy human volunteers (N=104) in a probabilistic fear conditioning paradigm (i.e., an experiment in which participants learned to pair a stimulus with a negative experience), which was conducted in a brain scanner (MRI) and combined with heart rate measurements using an oxymeter.

Humans received electric shocks through a finger index, while watching simple cues presented on a screen. One of the cues predicted the shocks with a probability of 30%. We specifically determined the physiological and associated neural response to threat predicting cues in the absence of the threat (electric shock) itself.

We found that in response to threat individuals carrying the 5-HTTLPR short allelic variant displayed increased fear bradycardia (a reduction in heart rate) and that this was mediated by increased connectivity between the amygdala (located deep in the brain and ‘signaling’ emotion) and the periaqueductal gray (located in the brain stem and mediating autonomic responses such as heart rate).

How the animal study was conducted

To determine whether 5-HTT knockout rats would display similar physiological and neural correlates, we subjected 5-HTT knockout and control rats to a fear conditioning and extinction paradigm.

During fear conditioning auditory tones were associated with footshocks. During fear extinction the tones were presented without footshock and the behavioural and physiological responses were measured.

We observed that 5-HTT knockout rats displayed increased freezing (no movement except for breathing) and fear bradycardia, like in human 5-HTTLPR short allele carriers. The freezing may reflect ‘pause-to-check’ as is typically observed in cautious individuals.

The activity of these neurons was in increased in the 5-HTT knockout and found to significantly mediate the association between the 5-HTT gene and freezing [3].

This study demonstrates that behavioural and physiological similarities between human 5-HTTLPR short allele carriers and 5-HTT knockout rodents have similar neural correlates, making it tentative to use the rodents to further understand the neurobiological basis of environmental sensitivity. 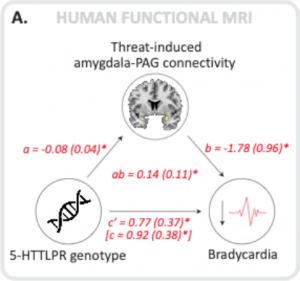 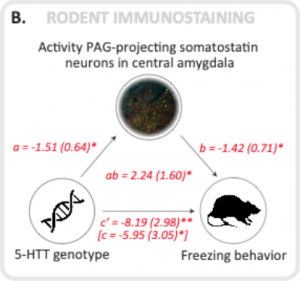 A mediation analysis shows that both in humans and in rats the connectivity between the amygdala and the periaqueductal gray (PAG) significantly mediates the association between inherited serotonin transporter (5-HTT) gene variance and fear bradycardia (humans) and freezing rats.