Skip to content
You are here: Home > Blogs > How the Sensitive Brain Processes Touch

How the Sensitive Brain Processes Touch

Prof. Schäfer is a neuroscientist and works on neural correlates for touch and body perception. He has published several studies on body perception, placebo effects, empathy, and social neuroscience.

It is assumed that some individuals might be more sensitive than others because their brain processes information from our senses in a different way. First results of brain imaging studies on sensory processing sensitivity (SPS) seem to support this view for the visual domain.

Our study (1) aimed to test this hypothesis for another modality: touch. Touch is a very important sense for humans and may be one of the first senses that emerged during evolution. In addition, touch may also be the first sense we develop even before we are born.

Do more sensitive people process touch differently than less sensitive subjects? If so, in what way? The current study (1) aimed to address these questions by scanning the brains of healthy young participants using functional magnetic resonance imaging (fMRI).

Sensory processing sensitivity was measured using the German version of the SPS questionnaire developed by Aron et al. (1997). The scale consists of 27 questions and is widely used to measure sensitivity.

Interestingly, more sensitive individuals did not perceive the experimenter’s touch as more pleasant or stronger, but their brains showed different activation patterns.

For all of our participants, touch by the experimenter’s hand was reflected by activity in primary and secondary somatosensory as well as in insular cortices, as expected.

We did not find any differences in the somatosensory cortices, but our results demonstrated that activity in the left posterior insula was stronger for more sensitive individuals (see Figure 1).

This finding was still valid when controlling for empathy and neuroticism, which are personality dimensions that have often been linked to sensory processing sensitivity.

What role does the insular cortex play in our brain?

Moreover, other brain imaging studies have also found that sensitivity is linked to altered processing in this brain region (3).

What does activation of the primary and secondary cortices indicate?

It is remarkable that primary and secondary cortices were not linked to sensory processing sensitivity. These brain regions reflect tactile experiences and activation represents our tactile discrimination abilities.

What does it all mean?

The results suggest that more sensitive individuals may not be literally more sensitive (at least in the tactile modality). This is in line with another study by our group, which showed that our tactile discrimination abilities are not linked to sensory processing sensitivity (but interestingly to our empathetic abilities) (4).

In other words, more sensitive individuals do not feel touch better than others, but they feel it in a different way.

The study has some limitations

Although the sample size may be typical for imaging studies, it is a rather small sample when examining neural correlates for personality. Furthermore, other personality dimensions, which we did not control for, might have influenced our results.

In addition, we do not know whether the results would be different if the participants had been touched by someone they liked rather than an experimenter they did not know.

We conclude that sensory processing sensitivity may not simply mean that some individuals have greater tactile acuity or physically feel touch stronger than others (or more or less pleasant). The primary processing of tactile stimuli may not be altered in more sensitive individuals, but the later processing steps seem to be affected. Thus, it is rather the interpretations and evaluations (or the associations we feel with the touch) that seem to differ in sensitive people.

Whether this applies to all types of touch (accidental touch, touch by animals, touch by non-living things, etc.) remains an open question. Moreover, we do not know whether this is specific to touch or whether sensory processing sensitivity affects later, more integrative stages of mental processing in all of our senses, stages in which we combine and integrate this information with information from other senses and from our memory. 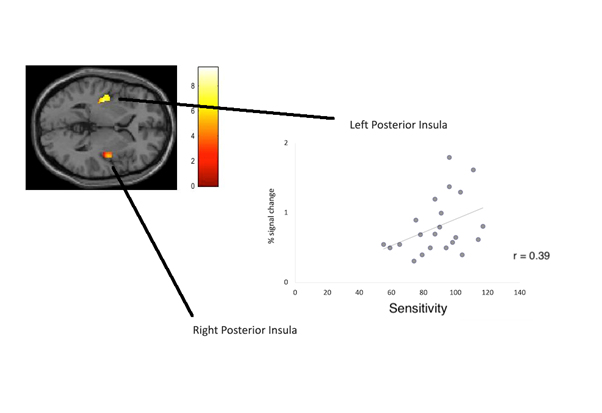 Brain responses when participants were touched by hand. Scatterplot shows relationships between SPS and peak activation of insular cortices.