Skip to content
You are here: Home > Blogs > Sensitive Children and the Quality of the Early Environment

Sensitive Children and the Quality of the Early Environment

Sara Scrimin is an associate professor in Developmental Psychology at the University of Padova, Italy. Her primary research interests focus on the study of individual differences in psychophysiological self-regulation and the effects of stress on development.

Our study examined children’s well-being in the presence of childhood adversities and support provided by their families. The role of children’s sensitivity to environmental influences was investigated as a potential moderator of both the positive and negative effect of the environment on children’s development. Data give important hints on the promotion of interventions providing clinical support to highly sensitive children in the context of particularly aversive environments.

Most families encounter a number of stressful experiences over the course of their lives that can affect the development and well-being of their children (1). Several studies have shown that both traumatic events but also everyday stressors faced by most individuals living in Western countries can affect child wellbeing (2).

Family adversities, such as parental separation, economic disadvantage, or stressful life events are not uncommon in the life of children (3). These events often tend to co-occur and their negative effects on children’s development cumulate.

Nonetheless, most children who encounter adversities early in life are able to adapt and function well (4). The degree of adaptation to family adversities is influenced by the presence of supportive experiences as, for example, the presence of at least one caring parent (5).

In this dynamic and complex picture, we can consider environmental sensitivity as an important characteristic of the child that plays a role in adaptation to challenges and opportunities associated with particular environmental conditions.

As described in the theory of Vantage Sensitivity (6), we expect more sensitive children to be more responsive to both positive and negative environmental conditions.

Hence, in the present study (7) we aimed to assess if sensitive children would benefit more from the support received within the family but also whether they would report poorer health, emotional well-being, and academic and social performance in response to aversive childhood experiences compared to their less sensitive counterparts.

How did we conduct the study?

We interviewed 227 children (mean age 7.05 years) and their parents. First we presented parents with a checklist containing a number of stressful events that a family might experience and asked them to report whether each event had occurred in the life of the child.

Next, children were interviewed on emotional and physical well-being, as well as academic and social performance. Last, they reported on perceived emotional support from the family and caring parental behavior. Environmental sensitivity was measured with the Highly Sensitive Child (HSC) scale (8).

What did we find?

Path analysis (a type of statistical analysis for complex questions) showed that, as expected, the number of family adversities was negatively associated with children’s physical and emotional comfort and perceived academic performance, whereas supportive resources provided by the family were positively related to child well-being.

What does this mean and what can we do about it?

Given the strong relation between the supportive resources provided by the family and children’s physical and social functioning, prevention programs should focus on supporting families in order to strengthen such an important resource for the child.

Most importantly, health professionals and policymakers must pay particular attention to sensitive children who grow up facing adversities because these children may benefit especially strongly from targeted intervention programs. 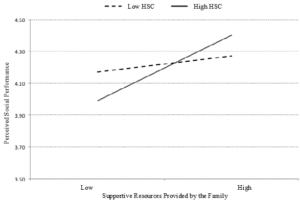