Skip to content
You are here: Home > Blogs > How Do Sensitive Children Respond to Harsh and Fluctuating Family Context?

How Do Sensitive Children Respond to Harsh and Fluctuating Family Context?

Dr. Zhi Li is an Assistant Professor at Peking University, China. Her research seeks to understand child and adolescent risk and adaptation to family and environmental adversity, as well as individual differences in environmental sensitivity at multiple levels of analysis.

We found that unpredictability of the environment was predictive of greater increases in child externalizing problems. Furthermore, children with greater sensory processing sensitivity were more affected by an unstable context, showing greater increases and decreases in externalizing problems when raised under highly unpredictable versus stable context, respectively.

The trait of sensory processing sensitivity (SPS) has been advanced as a potential indicator for such heightened environmental sensitivity. More specifically, SPS is a temperament trait that entails a variety of characteristics, including greater depth of cognitive processing, heightened sensitivity and awareness of subtle environmental cues, behavioural inhibition to novel stimuli, and elevated emotional and physiological reactivity and empathy.

Whereas empirical research has documented greater SPS to be a plausible indicator for heightened environmental sensitivity, research to date has not yet examined different dimensions of environmental adversity with respect to SPS simultaneously, and the vast majority of existing work used self-report measures to assess SPS.

In our study (1), we sought to (a) examine the role of two potent dimensions of environmental risk—harshness and unpredictability—on young children’s development of socioemotional functioning; and (b) evaluate whether children with different levels of SPS—measured via observation of child behaviour in the laboratory—may respond differently to these environmental risks.

235 families with a three-year-old child visited our lab annually for two years. During the first annual visit, we measured family context and observed the child’s sensitivity.

Environmental harshness was indicated by lower family socioeconomic resources, and greater maternal harsh discipline and lower parental sensitivity when interacting with the child.

These characteristics include, for example, greater depth of cognitive processing, higher tendency to “pause and check” before acting, careful and inhibited behaviour, greater positive emotionality expressed in a subdued way, and greater empathic attunement towards others.

As expected, highly sensitive children showed similar behavioural patterns across the various indicators of SPS, reflecting greater depth of cognitive processing, a tendency to be careful and inhibited, and greater positive emotionality, openness to interpersonal relationship, and empathic attunement.

On the “for worse” side, high-SPS children (top 25%) exhibited greater increases in externalizing problems over time if they were raised in highly unstable family and community context (see Figure 1).

On the “for better” side, however, high-SPS children also showed lower increases or greater decreases in their externalizing problems over time if their developmental context proved more stable.

In contrast, children with low SPS did not seem to be affected by their developmental context.

This study highlights the role of unstable and fluctuating family contexts, over and above the effect of harsh environment, in shaping child development over time. In addition, the effects of environmental unpredictability seemed to be particularly strong among children with heightened environmental sensitivity.

If these findings are replicated, they may offer guidance for clinical practice. Although children with high SPS are at greater risk for the development of problems in highly unstable contexts, they may also benefit the most from intervention programs designed to mitigate the negative effects of unstable family contexts. 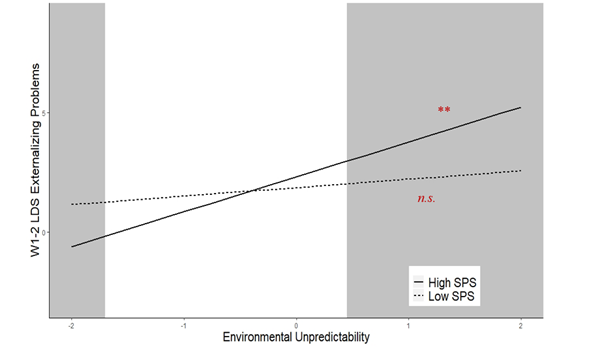