Skip to content
You are here: Home > Blogs > Sensitivity to the Childhood Environment is influenced by the Brain

Sensitivity to the Childhood Environment is influenced by the Brain

Theory suggests that differences in sensitivity are due to characteristics of the brain. We conducted a study to test whether certain brain regions predict sensitivity in a sample of boys. We found that boys with a larger amygdala were more sensitive to the quality of their childhood environment.

It is well known that children differ in how strongly they are influenced by their experiences. Research studies show that some children are generally more sensitive than others to both negative and positive influences. They suffer more when experiencing adversity such as harsh parenting but do especially well in supportive and caring settings.

Such differences in environmental sensitivity have been associated with various genetic, physiological, and psychological characteristics. However, according to the leading theories of sensitivity the main reason for heightened sensitivity is a brain on which experiences register more easily and more deeply. It is hypothesised that such “neurosensitivity” renders some children more sensitive to their environment.

In the current study (1), we investigated whether the amygdala and hippocampus are associated with sensitivity to the quality of the early childhood environment.

The study was conducted with existing data from 62 10-13 year-old boys selected from the Twins Early Development Study (TEDS), a large longitudinal study of over 16,000 twins born in England and Wales. The 62 boys represent a subset of children from the TEDS study that took part in a brain-imaging study.

It is possible to measure both the function (i.e., reactivity) of specific brain regions as well as the structure (i.e., volume). In this study we focused on the volume rather than the function. In order to measure volumes of the amygdala and hippocampus, participating boys were scanned in a magnetic resonance imaging (MRI) scanner when they were about 10-13 years old. Given that the brain has two hemispheres, we considered volumes of the left and right amygdala and the left and right hippocampus separately (see Figure 1).

Finally, the outcome of interest was a measure of child behaviour, including emotional problems, conduct problems, hyperactivity/inattention, peer problems, and prosocial behaviour, completed by teachers when boys were aged 12-13 years. The first four behaviours were combined into a total problem score.

We then tested whether amygdala and hippocampus volumes influenced the effect of early environmental quality on children’s behaviours. According to theory we expected that the effect of the environment on child behaviour would be stronger in some children due to differences in volumes of these brain regions.

Our study suggests that a larger amygdala volume, a small brain region involved in the processing of emotions, is associated with heightened sensitivity to the quality of the early childhood environment in boys. Importantly, boys with a larger left amygdala not only had reduced behavioural problems but were also rated by teacher as showing higher prosocial behaviour when experiencing a high quality environment. The hippocampus, on the other hand, was not associated with sensitivity in this study.

Although results have to be considered in light of the fact that the sample was relatively small and included only boys, the study provides further important evidence that sensitivity to the environment is associated with specific characteristics of the brain. 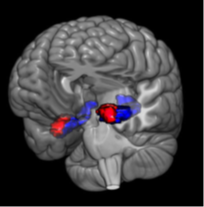 Illustration of the selected brain regions. Left and right amygdala are in red whereas left and right hippocampus are in blue. 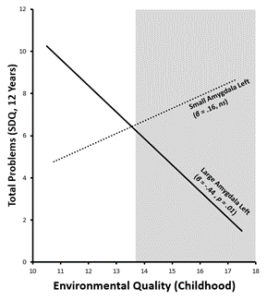