Skip to content
You are here: Home > Blogs > Practical Advice for the Highly Sensitive Brain

Bianca Acevedo (University of California, Santa Barbara) researches the biology of love, high sensitivity and mind-body practices. She was the recipient of the 2012 International Women in Science Award and is Editor of “The Highly Sensitive Brain.” For more information visit http://www.biancaacevedo.com

Sensitivity is associated with enhanced activation of brain regions implicated in awareness, memory, and empathy. However, this comes with a cost such as greater risk for over-arousal and overstimulation. Preliminary evidence suggests that for highly sensitive individuals “rest” may be especially critical for information integration and return to a well-balanced state.

Most of us know or may meet someone who is highly sensitive. In fact, approximately one in four people (20%-30% of the population) have an innate biological trait known as Sensory Processing Sensitivity (SPS) or Environmental Sensitivity (ES) which is associated with greater awareness and responsivity to environmental and social stimuli (1).

In the brain, enhanced sensitivity registers as stronger blood flow (enhanced signals) to areas that are involved in awareness, memory, and empathy (2).In addition to being more responsive to stimuli, highly sensitive (vs. less sensitive) individuals also process information more deeply, make connections across themes, feel intensely, and perceive the “sights and sounds” of the world in a more amplified way.

In the brain, this is observed as greater activation in areas that are responsible for complex, integrative processing of multi-sensory modalities and cognitively demanding higher order mental processes (2). Behaviourally, depth-of-processing manifests as awareness to subtleties, good listening, memory, empathy, creativity, meaning-making and recognizing connections across themes (3, 4).

These depth-of-processing features tend to express themselves positively in adaptive environments: namely those that are calm, orderly, pleasant to the senses, and not over-stimulating.

However, when environmental conditions are less-conducive to positive expression of the trait (such as when there are distractions in the environment, unpleasant sounds, and chaos), sensitive people tend to show physiological over-arousal, dysregulation, worsened listening, and poor performance on timed tasks (6, 7).

Thus, it is not surprising that highly sensitive individuals tend to prefer solitude over crowds, and thrive in calm and peaceful environments.

Also, because of the enhanced processing and overstimulation, sensitive people also need more down-time to recover from everyday events as well as novel, overstimulating and challenging activities.

While we are just starting to understand what actually happens in the physiology of highly sensitive individuals when they are “resting,” we have some preliminary evidence suggesting that important neural processes related to depth-of-processing, integration of memory and physiological homeostasis take place.

Also, further research is being carried out to understand what types of activities may be beneficial for highly sensitive people. Preliminary studies suggest that a yoga meditation practice may be helpful, as well as simply closing the eyes and relaxing (clearing the mind of thoughts).

Anecdotally, highly sensitive people also report that taking walks in nature, listening to music, and engaging in relaxing hobbies also help to replenish them. Thus, it’s especially important for sensitive people to honour the need to take breaks because important, higher order cognitive processes related to depth of processing and integration of information take place during rest and relaxing activities.

Also, if you are not highly sensitive yourself but have a highly sensitive child, partner, or co-worker, it’s important to be patient, go slowly, and be aware of the external conditions. If the environment is chaotic, toxic, or over-stimulating, don’t expect that the person will “shine.” However, do try to select environments that are sensitivity-friendly: namely those that are calm, orderly, and pleasant to the senses, and which allow for the trait to express itself in its most positive form. 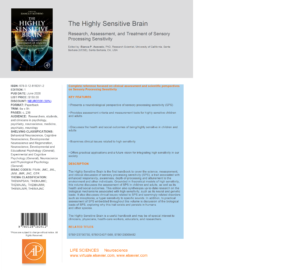