Skip to content
You are here: Home > Blogs > Genetic Sensitivity to Stress During Pregnancy

Genetic Sensitivity to Stress During Pregnancy

Dr Ashley Wazana is a child psychiatrist and an FRQS Senior clinical research scientist. He leads the psychiatric arm of the Canadian MAVAN cohort and an international consortium of 5 prenatal cohorts (DREAM BIG) which harmonizes comparable cohorts and examines how the early environment and genetic susceptibility interact to predict psychopathology.

Dr Vanessa Babineau’s research focuses on women’s mental health during pregnancy and the development of infant and early childhood dysregulation from 3 months to 6 years of age. She previously worked with the McGill Youth Study Team on a project that was focused on gestalt processing in high functioning children with autism.

Cathryn Gordon-Green’s research interests are centered in the area of biological sensitivity
to context. Using the MAVAN (Maternal Adversity, Vulnerability and Neurodevelopment) dataset, she is currently working on a project investigating how adverse effects of the prenatal environment and genotype interact to predict early age child development and psychopathology.

Genetic sensitivity moderates the effects of maternal stress during pregnancy on child behaviour with children that are genetically more sensitive being more affected by the quality of their prenatal environment. For example, our recent studies have indicated that the development of genetically sensitive children is more negatively affected by prenatal maternal psychopathology.

Psychiatric disorders as well as personality and temperamental traits have been shown to be highly heritable, with 40-70% of mental disorders being transmitted from one generation to the next.

Hereditary information is encoded via DNA and the genetic material that each of us inherits is a product of what we inherited from our parents with random genetic mutations also contributing to our genetic diversity.

The pathway between a DNA sequence and an observable trait is complex and implies that not all children with a genetic predisposition go on to develop a psychiatric illness.

Similarly, individuals with no genetic risk may still develop a mental health disorder; such individuals were likely exposed to adverse environmental conditions such as trauma, abuse or chronic stress.

Therefore, in most cases, examining a combination of an individual’s genetic risk and the environment in which they are born and raised in best explains their psychological outcomes.

A critical environmental factor affecting child development in negative ways is the prenatal environment, which can include maternal depression, anxiety, physiological stress, and life events such as living through natural disasters experienced by both the mother and father.

However, research suggests that these effects differ depending on children’s genetic sensitivity.

The interactive effects between genetic sensitivity and prenatal stress can be explained by the Environmental Sensitivity framework, which suggests that children who are genetically more sensitive will benefit more from a better prenatal environment whilst also being more affected by a negative prenatal environment.

Our consortium, DREAMBIG (Developmental Research in Environmental Adversity, Mental health, BIological vulnerability and Gender) examines this complex interplay between children’s genetic makeup and their earliest environment (i.e., the environment in which they develop during pregnancy) to predict the development of mental illness.

DREAMBIG is an international project consisting of four cohorts based in the UK (ALSPAC), Canada (MAVAN), Netherlands (Generation-R) and Singapore (GUSTO).

Currently, PhD candidate Cathryn Gordon-Green and colleagues are leading work in our lab using data from the MAVAN project, a community cohort of over 500 mother-child dyads from Montreal, Quebec and Hamilton, Ontario.

They are investigating the development of internalizing psychopathology, which includes anxiety and depression, in preschool age children by examining the predictive role of child genetic sensitivity, prenatal maternal psychopathology, and early child Negative Emotionality (NE).

NE reflects a stable behavioural tendency for sadness, fear and emotional over-reactivity and is linked to maternal mood during pregnancy and the development of later psychopathology in childhood and adolescence.

It was found that infants who carry more sensitivity gene variants develop higher or lower NE depending on the severity of the exposure to prenatal maternal depression.

In parallel work in our lab, recent graduate Vanessa Babineau et al., (2), reported that prenatal adversity is associated with childhood dysregulation. Childhood dysregulation refers to the deficits in the capacity to regulate or control one’s thoughts, emotions and behaviours and is associated with psychopathology throughout childhood and into adulthood.

This association is best characterized by a model of Environmental Sensitivity indicating that children who were exposed to higher levels of prenatal depression showed higher levels of dysregulation if they were genetically more sensitive.

These findings provide evidence in support of the Environmental Sensitivity model, which predicts that the interplay between genetic and environmental factors influences various psychological outcomes during development and that genetic sensitivity has an important role in determining how maternal mental health affects children’s development.

Clarifying the complex pathway to psychopathology informs prevention and early intervention that benefit the mental health and development of mothers and their children. 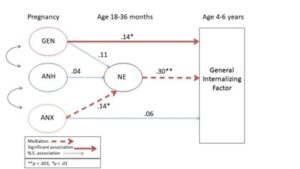 Figure 1. Early NE as a mechanism underlying the relationship between clusters of maternal prenatal psychopathology and childhood internalizing problems 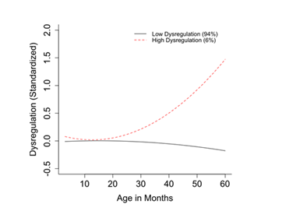