However, the focus of much of this work was traditionally on differences in sensitivity to exclusively negative experiences such as childhood maltreatment and stressful life events. As a consequence, sensitivity to the environment was generally understood as a vulnerability that increases the risk for the development of psychological problems when people experience adversity. This view has shaped the thinking in Psychology and Psychiatry for many decades.

Importantly, based on this vulnerability perspective such differences are thought to only emerge in response to a negative experience. In the absence of adversity, the model suggests that vulnerable and resilient people do not differ in their well-being: they are both doing equally well. However, the vulnerability model did never describe or even encourage to consider whether people differ also in their response to particularly positive experiences, such as warm and supportive parenting or the caring support of a loving friend.

From Vulnerability to Sensitivity

One of the shared and basic features of all recent sensitivity theories is that sensitive people are not only more negatively affected by adverse experiences but also benefit especially strongly from positive ones. But the traditional model of vulnerability is not able to describe such differences. In fact, when reviewing the literature, my collaborators and I did not find any psychological model or theory that clearly described individual differences in response to positive experiences.

One further and interesting consequence of Psychology’s traditional focus on vulnerability is the lack of any established terminology to describe people that are particularly sensitive to positive experience nor for people that seem to benefit less. That is, until relatively recently.

Challenged by the lack of theory and suitable words to describe sensitive people’s tendency to benefit especially strongly from the positive effects of positive experiences, I endeavoured to develop both the missing theory and terminology. Together with Prof Jay Belsky, I ended up published a theory in 2013 that we named “Vantage Sensitivity”.

Hence, sensitivity to both negative and positive influences therefore reflects the combination of the vulnerability and the Vantage Sensitivity model. Together these models can explain how the same people are more sensitivity to adverse but also supportive experiences.

Although a relatively recent theory, there is now a growing number of studies that provide evidence for individual differences in Vantage Sensitivity. I would like to describe one of our studies as an example.

The research study took place in a secondary girls-only school in London (Pluess & Boniwell, 2015). We tested whether 11-13 year old sensitive girls would benefit more from a psychological school programme aimed to promote resilience and prevent depressive symptoms. Sensitivity was measured with the Highly Sensitive Child scale and girls reported depression symptoms before and after the 12 week programme.

In summary, research studies provide evidence that highly sensitive children benefit especially strongly from positive experiences, such as psychological programmes aimed to improve psychological well-being. The Vantage Sensitivity model is helpful in describing such differences and advances our theoretical understanding of the benefits of high sensitivity. 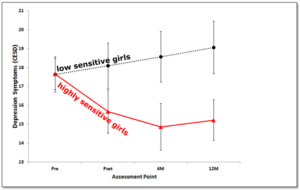